Showing posts from November, 2005
Show all

November 30, 2005
What a trip. I made it alright. I am in Brasilia now. Enjoying the rainy weather. It has been raining since I have been here. There was an additional lay-over in Sao Paulo. It was frustrating, They couldn't just tell us we would be delayed for an hour. They just kept saying every 20 minutes, in 20 minutes we will board. They did give us a free sandwich and drink for the delay. Everyone at the airport was very friendly. The TV here has several English sitcoms. So I have been able to watch a few shows. Even saw a CSI episode I hadn't seen before. The carry fox news live. So I get to see the afternoon shows in the evening and they are still live. Cool factor way up. They high speed internet at the hotel isn't high speed. It is juiced dial up. A smokin' 64kbs. I survive.
Post a Comment
Read more

November 27, 2005
It was a bitter-sweet weekend. Not the Thanksgiving celebration with my family, but for football. The Cowboys lost in overtime, but the Gators whipped the FSU Seminoles. I was on the road for both games. But thanks to Sirius radio, I was ables to listen to the Gator game on my way home. This past week I was able to spend some quality time with family of Tronster in the sticks of South Carolina. I also visited family in North Carolina. A fun time to be sure. The family is getting along pretty well. Father of Tronster and Tronster did some remodeling in grandma's house. She needed a bigger bathroom, as she gets older and requires handicap access to the crapper. Its always fun to tear stuff down. So we took out a wall and expanded the bathroom. Merry Christmas. I have now returned to casa de Tronster. I have to prepare for my next adventure. Off to Brazil. Keep checking back. Tronster
3 comments
Read more

Technology is a wonderful thing

November 16, 2005
Hey readers As most of you know, I love technology. I have an IPod, palm pilot, cellphone, laptop, and multiple computers. A gps and various other high tech toys, that I love to play with. I am fairly proficient on most of these devices. So when I moved to the DC metro area and signed up for cable, I got a deal on a DVR. This thing is cool man. Let me tell you what it can do. As I frequently must go to bed early, I record my favorite shows and watch them when I get home from work the next day. Well Monday night football featured America's Team, the Dallas Cowboys. Playing the Superbowl contenders, Eagles. I am a big fan, of the Cowboys. (mainly because of their cheerleaders, but I digress). Halftime, my eyes were heavy, and I knew I wasn't going to make it to the end. So I fired up this new gadget to record the end of the game. I programmed in the show, and let her rip. All day Tuesday I was able to avoid the other fans at work, mainly pesky Eagles fans. So when
2 comments
Read more 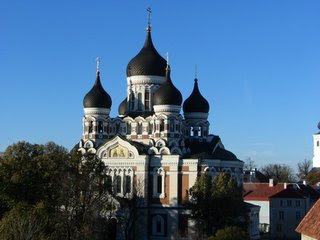 Hey readers. First, thanks for stopping by, here are some pictures from Estonia..... The above picture shows a church in the middle of old town. Here is a long shot. The building on the right is my hotel, the other building lights up at night and served as a wonderful night light. Kept away all of the scary critters that can sneak into a room when you are sleeping. They call this a smart car, or commonly reffered to as a death trap. Hope you enjoy the pictures. Tronster.
2 comments
Read more
More posts