Showing posts from October, 2006
Show all

October 31, 2006
No post yesterday because many things had to be accomplished. With friends in town for the weekend, I had some catching up to do at Casa de Tronster. I am back on track now. I have changed my cell phone to a new Motorola Razor, its pretty cool. I am still mastering its features, but I will be proficient by the end of the week. I will even try mastering taking two calls at the same time. We shall see. Friends of Tronster and Kirby ventured out a little more this weekend, and Saturday turned into a pretty good day. We visited China Town, Ford's Theater and a few other sites. Did you know John Wilkes Booth was an actor? I had no idea, but I could see it as a possibility. What I never would have guessed was he was a Brad Pitt of the day. Its good to learn new things every day. I am not one to make fun of friends, but Kirby mentioned in his comments to inform the world of MBs superior reading ability. I was going to let the following slide, but she made the comment "I
2 comments
Read more

October 27, 2006
It sure has been a great day. Sort of. I am fairly savvy with technology toys. I have an Ipod, 3 laptops, and 2 PDAs. Yet I am unable to switch between two calls on my cell phone. Oh well, maybe I can figure out before two people try to call me again. Friends of Tronster and Kirby are visiting this weekend. So of coarse DC is soaking with rain, yet we ventured out into the elements and checked out the sites. It was cold, but we checked out our founding documents and the gardens. Thand to Congressmen Ander Crenshaw of Florida for the gallery passes.
3 comments
Read more

October 22, 2006
I have HD.I love to watch great sports in HD. ESPN has 2 HD channels. During the big football game of the week, they show to many angles. They call it 360 degree coverage. Why not show another game? There is normally two good football games on at the same time. But the real reason for this little note is the lack of programming outside the weekends on ESPN2HD, They were showing POKER tonight. Number 1, it is a stretch to call poker a sport, but even if it is, they are showing it on the HD channel with side bars. What crap. Get with it guys, you can't find a single piece of HD programing?? A re run of the top college games or something. I like HD for the most part.
1 comment
Read more 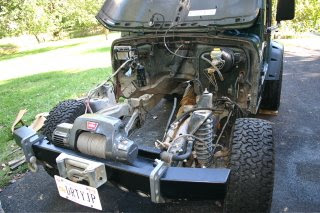 My friend called the other day to ask me to help him with his jeep. He said that it wouldn't start and and wanted some help to discover the problem and possibly repair it on the weekend. So we trucked out to where it was parked and began investigating why it wouldn't start. According to the gauges, he had plenty of fuel, and then we spotted this: Now that explains a lot. No Motor!!
1 comment
Read more

October 20, 2006
Half day Friday This weekend has started for me. I worked late on Wed and now I have 2 and 1/2 day weekend. Yeah. So what will I do with this spare time. Well, Laundry. I know it sounds exciting, and it really is. I am preparing for a weekend of no laundry. It makes it worth it. Picked up a Dean Martin CD along with Over the Hedge (great movie). The CD is pretty good. More details to come along later.
Post a Comment
Read more

October 17, 2006
Well it has been over a week since I have posted anything. I've been in kind of a funk lately. Not that I haven't been busy, just not very thoughtful. What has happen in the last few days? Well, I went to the power boat show in Annapolis MD. Homecoming weekend for the Midshipmen. Well they got beat, pretty bad as a matter of fact 34 to 0. It was homecoming as well. he show was fun, but the traffic was terrible. It doesn't help that every city between here and there was under construction. I acquired a couple new printers, haven't hooked them up yet, but got a good deal on both of them, so eventually I need to check them out. I also went and saw the movie "Man of the Year" Not what I expected, but still funny. Thats it for now, talk to ya later.
Post a Comment
Read more

October 06, 2006
It turns out that I need an editor. I had to fix my last post, because I can't type or spell. Maybe I should pick up "Natrually Speaking" so that I can create a quality post. It has been a quiet week. So when the weekend arrives with a holiday, I took the day off. No particular plans, just going to do nothing and feel good about it. So for all you guys reading this at work, Ha, ha. But I will have to work next week.
1 comment
Read more
More posts