March 04, 2007
Well, it has been a couple of days and I thought I would jot a few things down to let everyone know that I am still kicking.

First, yesterday I spent the day with a friend at the jefferson memorial. A great place in DC to visit. It was a little chilly, but all in all we had a good time. We walked around the tidal basin, and my friend allowed me to take several pictures of the local wildlife. Gulls and ducks and geese. Lots of fun for me. Most of my shots were of the gulls. I filled up the remainder of a 2 gig compact flash card. Around 300 pictures. Shortly after putting my camera away, because I forgot to bring another card, I spotted an eagle looking for dinner. As it swooped down to the basin and grabbed a fish, I thought to myself, that would have been a great shot. I will, from now on, have lots of memory with me.

I was able to catch two movies this weekend. First, Wild Hogs. This is a funny movie with lots of slap stick comedy. If you are looking for a few laughs and not a very deep plot, you might enjoy this movie. Seeing John Travolta and William Macy play in this type of comedy was fun. I give it 3.5 stars out of 5.

Next, this afternoon Kirby and I went and saw Amazing Grace. This movie has a more serious tone and shows some history into the struggle for abolishing the slave trade in England. It is the story of William Wilberforce. One of the great christians of history and his battle to outlaw slave trading in the English empire of old. This movie was very well done and showed how a man with a higher calling can serve. I recommend this movie to anyone who has every wondered how and why the song was written.

gatorham2000 said…
I have another dog (named after food)and his name is Biscuit! He is a Border Collie. He and Peanut are playmates. I should send you a pic of them both .....
1:27 PM 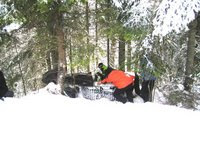 As most of you know, I travel a little bit with my job. My last destination was Sarajevo. It was a blast. I completed a difficult task which required analytical skills and problem solving. Two things everybody knows that I am good at. Overall I view it as success. I also had the opportunity to go snowmobiling with some colleagues. A good time was had by all. I did wreck my snowmobile, as the picture below shows. With only a minor injury. I am alright, but I did bruise my but pretty good. Tronster will spare you the picture of the bruised buttock that he is currently suffering from. After the crash, Tronster was interviewed for the local news. I guess my stardom was going to catch up to me sometime. So I had to grant an interview for all my adoring fans. "Bill" the mask also went on the adventure, however, it was to cold for him on the mountain. But he did go around town and find this totally cool T-Shirt. Please enjoy the pun intended in this post and l
Read more