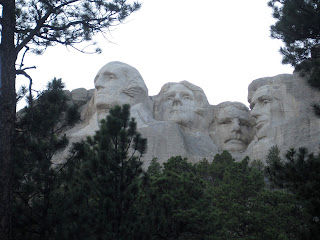 A recent trip to South Dakota, my wife and I, along with some old and new friends, visited Mt. Rushmore.  It was a magnificent view.  The work involved in creating such a monument. There are four presidents on this monument.  I never knew them by memory, however, looking at it a could identify each head.  However I never knew why each of the presidents were chosen.

President Washington, our first president was chosen for the theme of the "Birth" of a nation.

President Thomas Jefferson, was chosen for the Louisiana Purchase and the theme "Expansion" of a nation.

President Theodore Roosevelt, was chosen for theme of "Development" with the Panama Canal, National Parks and other acts.

Abraham Lincoln was chosen for the theme of "Preservation", credited with saving the Union.

This monument cost less then a million dollars to build. (Who knew) It was finished sometime in 1941.

This should be on the bucket list for all Americans.

If people came to Mount Rushmore, and took time to view those huge statues of the Presidents, would that make visitors rushless?