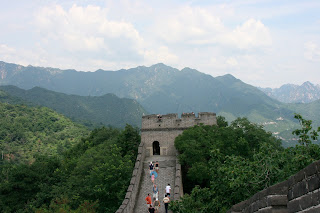 The Great Wall of China.  They began construction as early as the 7th century BC.  Most of the wall was rebuilt during the Ming Dynasty. 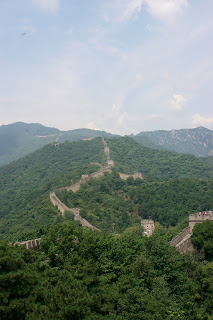 It started off as a series of walls to protect China from nomads and raiders.  It was later connected to form the Great Wall.  Some surveys using modern methods, have estimated the wall to be about 13,171 miles long.  This distance includes some natural protectors such as cliffs and lakes.

I visited the Great Wall while working in Beijing during the weeks leading to the Olympics.  We took a short drive to the wall.  It kills me that I cannot recall the exact section I visited.  I suggest for your travel junkies to start keeping a journal when you travel.  So when you look back, you can recall the great times.

There are your typical tourist stuff at the wall, you can have you picture taken with people in costume and at different sections of the wall.  Each of the "actors" request a little money to pose with you. It isn't very expensive and probably less so when the olympics are not in session. 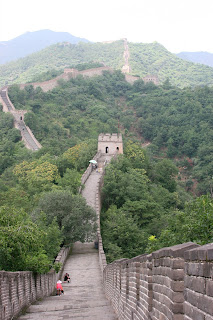 Several sections of the wall are very steep.  We took a ski-lift from the base of the mountain to the top.  We got a good workout walking between a couple of the watch towers.  Most of the wall is not rebuilt.  But several sections have been restored to allow tourist to check them out.  Our decent was in a bob-sled.  You had a break and road down the hill.  My friends and I had a great time at the wall seeing such a magnificent piece of construction.  Realizing how old it was and how much they have restored (which isn't very much) was also very interesting.  Our day on the hill was clear and warm.

Beijing has a lot to offer for you to see. If you are already in China, you should make the trip out to the Wall.


The A to Z is almost done.  Keep up the good work and come back and visit anytime.

Email ThisBlogThis!Share to TwitterShare to FacebookShare to Pinterest
Labels: A to Z Challenge, China, the great wall, wall