May 15, 2013
If you are on a trip to south Florida, the Everglades are place to stop.  The landscape is majestic and different from just about anything you can see anywhere else in the world.  There are wetlands everywhere, but the Everglades are awesome.  In the tradition of things to do when you are on vacation, an airboat should be on that list. I had the opportunity to visit the Florida Everglades in Coopertown, FL. 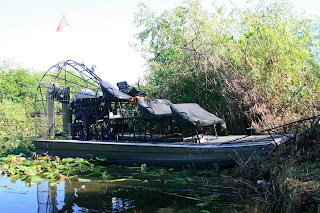 We woke up early on Saturday and hit the road heading south on I75.  Florida uses lanes that have tolls without toll booths.  I believe they called them "Hot Lanes"  Apparently they take photos of your license plate and send you a bill if you do not have an EZPASS device.

Regardless, we arrived at the airboat ride establishment at a good hour.  They had been open for about an hour, but there was no traffic.  Our group was big enough for a small boat.  (The boat could hold 8 and there were 5 of us)  They have larger boats for bigger groups, however, our was a good size.  The driver/boat captain was very knowledgable and gave a great tour.  Even though the everglades water level was low, he was able to run the boat at a high rate of speed, take us to some sandbar type locations and pointed out several large gators.  Apparently, some people have been releasing pythons into the everglades which is causing problems.  However, we did not see a single snake. 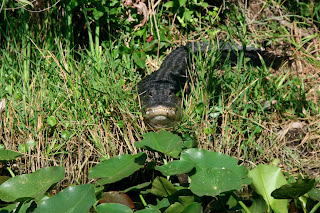 Check out this guy.  He seemed awfully interested in our passing.  Alas, no one was hurt and he could not give us directions back to the dock.

A great experience and everyone should add an airboat ride to their bucket list.
air boats alligators coopertown airboat rides Florida

Travel savings said…
That looks like a lot of fun. I have always wanted to try an airboat ride and if I ever do visit the Everglades I want to try it. The fellow in your picture looks like he can give you directions to the nearest restaurant.
3:24 PM

Sean said…
One more tip for your visitors: A trip to Everglades is Not worth unless you are camping
5:13 AM