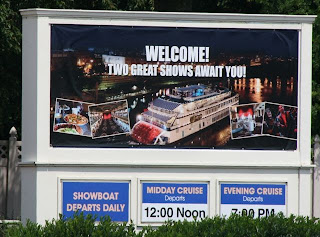 A great opportunity was presented to me a couple of weeks ago, so my wife and I took full advantage.  Leaving our home in northern Virginia, we headed to east Tennessee to spend the weekend with a dear friend.  Well, they did not want to sit around and do nothing, so we loaded up the old SUV, and headed to Nashville.  It was only a day trip, and we had had Tickets to the General Jackson showboat.

The folks that put on this show are very friendly. We load up the car, pick up another friend and off we go.  Arriving about an hour before departure gave my wife and her friends the chance to go shopping at the near by mall.  Then we grab our tickets from the desk and off to the pre-boarding area, where there is a musician entertaining us while we wait.  Directions for what to do are announced and then boarding begins.  During the 3 hour cruise there are two separate lunch settings.  Since we were a little hungry, we got the 2nd seating.  Figures. 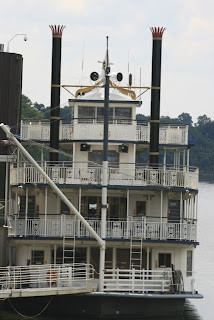 From the fan tail, that is the back of the boat for you land lovers, we can see the other showboat docked next to the pier.

The general idea, is you load up, look around, by some drinks and enjoy a cool day on the Cumberland river.  The boat, a paddlewheel, takes about an hour to get to downtown Nashville.  You can see the coast of the river and they have a couple musicians entertaining you on the top deck of the ship.  These guys were really good, and they mixed in a lot of comedy with music.

After the ride to downtown, and setting in the sun for an hour or so, we were ready to eat.  Lucky for us, they were ready to serve.  It is an unlimited buffet and show.  We were watching Shotgun Red and a his something or other.  I forget now.  Regardless, it was also a comedy musical show.  All though the show seemed a little rushed, we still enjoyed the entertainment very much.  The scenery was also a good way to relax on a Saturday in Nashville.

"G" is for Gettysburg

Gettysburg PA, the site of an important battle from the United States Civil War.  Living in Northern VA, not all travel destination require us to get on a plane.  The Gettysburg National Military Park is a prime example.  This park has been featured in several movies, including Gettysburg, as well as Remember the Titans.  If you are a Civil War buff, or American History buff, this is a place to visit.  I believe the military study of this battle has been extensive. The battle of Gettysburg ended Robert E Lee's second invasion of the North during the Civil War. It was the bloodiest battle in the a war, with somewhere around 51,000 americans being killed on the field. This year is the 150th Anniversary of the Battle of Gettysburg.  There are several events planned. The park is located in Gettysburg PA.  It is about 90 miles north of DC, located in central southern Pennsylvania. My wife and I had some friends over last year and we took a road trip to Hershey Park, (A post f
Read more