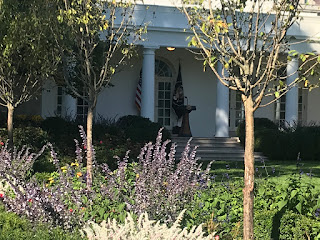 Many people watch the news and when the President speaks from the white house, there are a couple of locations used.  One of those locations is the the Gardens.  The white house semi annually, (I believe) opens the grounds so we can you can have a tour.

I have been living in the area for several years and never knew this to be the case, until someone invited us our to see.  Tickets are free, and unfortunately I am not sure how to get one.  Sunshine was able to acquire one or two, and we decided to check it out.

The Rose Garden, which hosts many briefings, was still set up from a briefing earlier in the week.  At least that was my thought the day we were visited.  However, this could all just be props for the event.  None the less, Sunshine and I got to see the very podium the president uses to speak to the American People.  I also expected there to be many more Roses, considering the name of the garden.  However, there really was not all that many.  This could be caused but the time of year we visited, or, they may not have many rose bushes or plants in the actual Rose Garden. 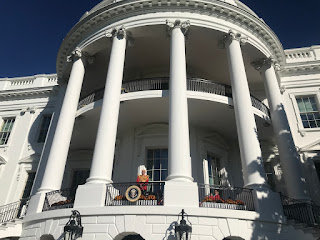 The President’s own band, I think that is what they are called, had set up and was playing music the entire time we were there, adding to fun
we had.  We can see the conductor from in front, the rest of the band was out of sight.  The selection of music was patriotic and upbeat.

These are the adventures that make living in the DC area so interesting.