Tronster and the love of his life, Sunshine, always enjoy animals.  In September of 2016, we made a special trip to Toronto to visit some friends.  Also none as “distant cousins”.  Regardless, while we were in town, we grabbed a “City Pass”  which included a trip to the local zoo.

Toronto is about an 8 hour drive for my family.  Mainly because I obey speed limits.  Some have made the trip faster, however, I prefer to stay away from traffic court in other states. The zoo is about 700 acres of animals and exhibits for people to visit.  Sunshine and I always enjoy the Pandas.  They play around in their habitat and always look happy.  The part that makes me happy, is the smile on Sunshine’s face when she sees the enchanted animals. 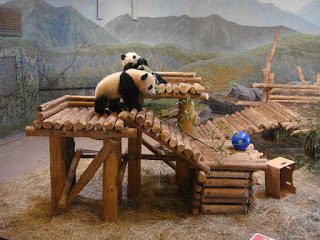 In 2012, on a trade mission to China, it was announced that the Toronto Zoo and the Calgary Zoo would be lent two giant pandas from China for the span of ten years, with the pandas splitting the time equally between the two facilities. The pandas, named Er Shun and Da Mao, arrived at the Toronto Zoo on Monday, March 25, 2013, greeted by prime minister Stephen Harper. Their exhibit opened on May 18, 2013. The pandas originated from the Chongqing Zoo and Chengdu Panda Base, resided in Toronto from 2013 to spring of 2018; moved thence to the Calgary Zoo for 2018 through 2022. In October 2013, Er Shun gave birth to twin cubs. The exhibit closed on March 18, 2018.

The Smithsonian Zoo, or National Zoo, also had an exhibit of Pandas.  A cub was born here not too long ago. I could look that up for you, but, you are already on the Internet.

During this time, when social distancing and travel restrictions are in place, I figured I would share a few of my adventures in the past.
Toronto Travel vacation ideas zoo

October 05, 2008
Well I am back in Casa de Tronster, Just got back from church. Jacksonville plays on National TV tonight, when they go up against the Steelers. I will be rooting for the Jags. The Gators were victorious once again, I hope it isn't to late for them to challenge for the National Title again this year. We will see.

Some of you may know, that Father of Tronster is a Pastor, well, at my church today the name of the sermon was "Why God hates pastors" Go figure. It wasn't what you might think, but was a good sermon about being a pastor. Boy do they have a hard job. Good luck Dad.

Well, back to football.
Read more